Immanuel: God with Us

Immanuel: God with Us

Reformed theologian, Michael Horton, has said that second to the incarnation itself the most miraculous thing about Jesus’ birth was that no one died. That sounds quite dramatic. What does he mean?

When father Adam and mother Eve were brusquely expelled from Paradise, at the garden gate God posted the cherubim guard, fearfully illuminated in a night of dark trees by the red-orange glow of a flaming sword. No re-entry. Eden’s exiles were barred any return to Immanuel’s land – at the heart of which was the Tree of Life, the emblem of God’s holy Presence, the fullness of the divine Life. 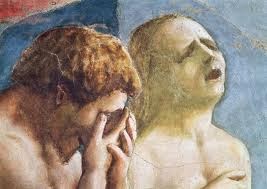 There was no way back – at least, no way we could see; no path we could cut. But despite our rebellion and running, despite our deception and hiding, despite our guilt and our shame, God’s Paradise would burst the gates and spread into all the world. You see, it was God’s intent from Day One – when the eternal Word bellowed in the caverns of deep space (“Let there be Light”) – to fill all things with Himself, to imbue the whole universe with His presence. I don’t mean “presence” in some technical sense – that God would be omnipresent, existing everywhere, all the time. That is true of God automatically. It is an attribute of His divine nature. By “presence” I mean the kind of relational presence that emerges that moment when two strangers discover they are kindred spirits. The kind of presence of mind and heart, as when your husband is listening to every word you’re saying, taking it in, and responding in real space and time. It is the sort of presence experienced when old friends are reunited, and “catch up” enthusiastically over a cup of coffee or a good merlot. That is the kind of presence with which God wanted to fill heaven and earth.

So God first ruptured the silence with Adam’s lost children. Most notably, He appeared to Abraham, Isaac and Jacob. These moments were sporadic and often traumatic. When Jacob awoke from his dream of heaven’s ladder, he exclaimed: “I have seen God face to face, but my life was spared.” When God first appeared to Moses in the burning bush, He declared: “I am the God of your ancestors—the God of Abraham, the God of Isaac, and the God of Jacob.” And Moses covered his face because he was afraid to look at God. And even though Moses was unique among men because God spoke to him, alone, “mouth to mouth, even openly…[such that Moses beheld] the form of the LORD,” yet when Moses asked to see God in His glory, he was told: “You cannot see My face, for no man can see Me and live!” Perhaps all these personal encounters with the living God are best typified in the response of Samson’s parents after their divine visitation: “We shall surely die,” they said, “for we have seen God.”

It’s as though the divine glory is simply too much for us; an overwhelming presence that, unmediated, would crush us. We are like hell’s tourists in C.S. Lewis’ The Great Divorce – even the grass of heaven proves too substantial for our thin existence, piercing our ghostly feet.

Similarly, when the infant nation of Israel stood before the mountain of God – Mt. Sinai – and it quivered and swayed under His thunderous approach, the people trembled and shook too (Exodus 19:16-20:21). And for good reason! God said, “Go down and warn the people, lest they break through to the Lord to look and many of them perish. Also let the priests who come near to the Lord consecrate themselves, lest the Lord break out against them.” God’s presence is dangerous to Israel. It is dangerous to us, the exiles of Eden.

Yet God was determined to “move in” with His bride. If she was unfaithful, she was loved nevertheless.

Dead center within Israel’s camp, God would pitch His own tent, the Tabernacle. But there were significant precautions taken. The tabernacle was gated. And beyond its walled courtyard was the holy place, enclosed and protected. Its entrance eclipsed by an altar. Further in, inside the holy place, was an inner sanctuary: the holy of holies. No man entered here, except the high priest, and that only once a year. And so, just as the blood dripped continually from the horns of the altar, God’s presence continued in the camp. Outside the Tabernacle, flanked on every side, were the tents of Levites. Not unlike the Cherubim stationed outside the garden, the priests guarded God’s holy presence – protecting both the people from God’s unmitigated presence, and the holy space of God’s house from the defiling sin of the people.

A few hundred years later, a king named David from the tribe of Judah would propose to construct for the Lord a more permanent structure. After all, if he, a mere human king occupied a palace in Jerusalem, why shouldn’t the Lord, the king of heaven and earth? But the Lord stopped David in his tracks: Have I asked for a house to be built for Me? Am I homeless? A god in need of a shrine? No, you will not build a house for Me, David. Rather, I build a house for you. A dynasty. A son from your line will build my house – and he will be to me a Son, and I to Him, a Father. And his throne will endure forever. His reign will never end.

Little did the king know that the house God builds David would be the house of God – the tabernacle of the Shekinah glory! As a token of God’s faithfulness, David’s boy, Solomon, would build the Lord a temple – a more permanent, more expansive, more impressive rendition of the Tabernacle. Of course, this Temple would not prove to be permanent. It was never in God’s plan intended to be. It was an emblem for God’s breaking into and inhabiting the world. But before the Temple could realize its fulfillment, it would be evacuated by the divine Presence. Its downfall dramatically marked by God’s own departure immediately before Judah’s exile – their removal from Immanuel’s land.

More than a century earlier, Isaiah the prophet had offered Judah’s king, Ahaz, a sign – to confirm faith that the Lord would protect David’s House and the land of His people. Ahaz refused the sign, and so it became an omen to him: “the virgin shall be with child, and she shall call his name Immanuel.” This child would grow up, not as a king in a palace, in a land at ease, but in hardship, in a land under siege and foreign dominion. Nevertheless, because God is with us, the faithful will survive – even thrive. And this Immanuel would be hailed, “Wonderful Counselor, Mighty God, Everlasting Father, Prince of Peace. Of the increase of his government and of peace there will be no end, on the throne of David and over his kingdom, to establish it and to uphold it forever and ever.”

700 years later…the Word who was with God, and was God, from the beginning, became flesh, and, as Eugene Peterson so memorably put it, moved into the neighborhood. He was God ‘tabernacling’ in a Judea under Roman rule. And yet, this One, this Son of David, this Immanuel, would be rejected by His own. When Christ was born, someone did have to die. He would be crucified as a criminal, outside the camp – rejected by man and God. Cursed. God exiled by God. And yet, because He was cast into the outer darkness, carrying our sin, our banishment is over. Bursting the gates of hell and death, He’s brought Paradise to us. The cherubim’s sword is extinguished. The separating curtain torn. The wall of division razed. And we are welcomed into the very presence of God – no longer strangers, but sons. No longer enemies, but friends. No longer objects of wrath, but objects of mercy – forgiven and loved. Even the very apple of His eye.

Because of Immanuel, God is with us.